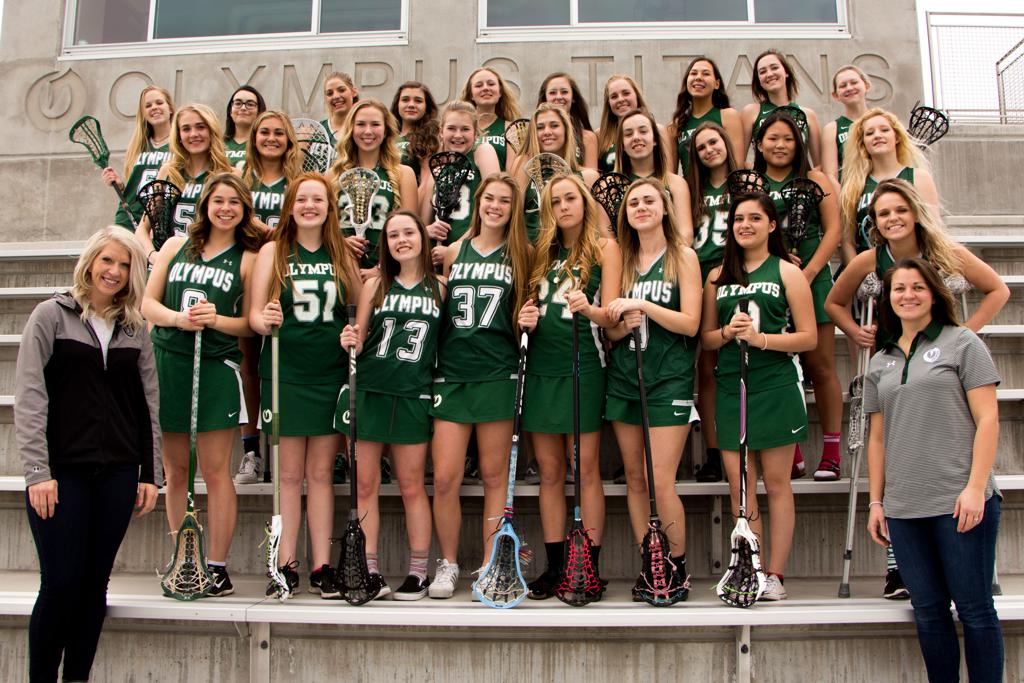 Athletes. That is the single word that came to my mind time and time again as I watched the Olympus Girls Varsity Lacrosse Team compete in the championship game of the 2017 High School season.  It was clear from the very first pass thrown during team warms ups that the Lady Titans had come to this final game as a team of experienced, skilled, and driven competitors. In their minds, they were already champions in everyway except in title. While their opponents rallied themselves with various cheers and chants, the Titans huddled in tight as one team, and with a progressively increasing voice and tempo, repeated a single sentence; “Ooh, Ah, Ah…You wish you were a Titan!” When the huddle finally broke and the starters took the field, their faces set, their minds and bodies ready for battle, these lady athletes settled into their positions on the turf and waited for the opening whistle. And when that whistle came, there was no stopping them. Athletes know no race, no creed, no color, and no gender; just a passion for the sport, a drive for perfection, and the undaunted will to win.  Controlling the first draw, the Lady Titans moved the ball well, demonstrating solid passing and coordinated teamwork. Within 90 seconds Olympus had their first shot of game saved by the Weber goalie. However with a strong Oly ride and a failed Weber clear, the Lady Titans had control of the ball and game once again.  Another nice cut, a sharp pass, a quick shot and the ball was in the back of the Weber cage: Oly 1, Weber 0. And thus it would continue for the next 50 minutes: 2:0. 3:0. 3:1. 3:2. 4:2. 5:2. 6:2. 7:2. 8:2. 9:2. 9:3. 9:4. 9:5.10.5. 10:6. 10:7. 11:7. 11:8. 12:8.

It is interesting to note that all things begin and end at a specific moment in time and space. And for the athletes of the Olympus Girls Varsity Lacrosse Team that moment came on Saturday, May 20, 2017 at 1:52pm MST.  Two things happened simultaneously at that very moment: The first and most obvious, Olympus Lacrosse won their first state championship. Years of personal work and sacrifice as well as hours-upon-hours of team practice all culminated in the moment. It was and is a new beginning for the Olympus Girls Lacrosse program. And frankly being there was awesome. However, among the cheers and tears and excitement, something else happened far less obvious yet perhaps, for Clara, Hannah, Regan, and Maclaine, far more powerful. For at that very same moment that the team was crowned victorious, these four senior varsity athletes closed their high school lacrosse career forever, sealing it as a champion in both practice and title. That brief moment in time has now passed but for those Olympus Athletes, it will never be forgotten. Thank you parents. Thank you Board members. Thank you coaches. And thank you players for an amazing season. You are indeed champions. Athletes, all of you. “Ooh, Ah, Ah…You wish you were a Titan!” And yes ladies, as a matter of fact, I do indeed wish I were a Titan. Congratulations Champions!

It was clear as soon as Olympus took to the field last night that this game was special. Not only did the Lady Titans come out ready to win (which they did by the way, 14 to 1 over West), they came out clearly devoted to each other as teammates and as a lacrosse family. They shared in each other’s successes, worked to lift each other a little higher, and backed each other up. They smiled, they laughed, they hugged, and they even shed a few tears. But that’s what families do. As a special surpize, long lost "family member," Claire Tempest who graduated early in December, came back to support her team.  As did members of the Boys Varsity Lacrosse team. During halftime, the four seniors standing alongside their parents, were honored for their contribution to the team. Clara Aubin, Regan Shleidt, Hannah Toro, and Maclaine Ward have not only been indispensible to the Lady Titan program over the years, they have stepped up to teach and mentor the younger players on the team, preparing them to carry on the Olympus Girls Lacrosse Program well into the future. Ladies, we are grateful for your willingness to share of your time and talents and your deep commitment to your school, Oly Lacrosse, and your friends and teammates. Good luck as you move forward from here. Clara, Regan, Hannah, and Maclaine, as you step off of the field for the last time, know that you are well loved by your team and will be dearly missed.

From the first whistle, it only took a few moments for the Titan’s Varsity to push down the field and put the first of 14 goals in the back of the cage. Olympus took the lead early and held it for the rest of the game, never looking back.  The Lady Titans demonstrated unselfish play by passing and moving the ball well on the offensive end. On the defensive side, the ladies held tight coverage and picked up the slide and crash to shutdown the Beet Diggers’ attack.  In the end, it was another solid win for Olympus, 14 to 8 over Jordan.